Don't Forget What You Just Learned by Kris Swiatoch0

As soon as you leave an event/study/conference, etc., the enemy will work very hard at getting you to forget what you have learned and any decisions you have made. He will make many attempts to distract you.

Pray for a Mate™

About Pray for a Mate™...In my 25 years of ministering to single adults, I have found one major thing common to 99.9% of them—the desire to be married or married again. From conferences to retreats, articles and interviews, the subject continuously comes up.

I hear questions like:
“Do you think I am meant to be married?”
“Is there such a thing as ‘the one’?”
“Why hasn’t God brought me the man/woman of my dreams?”
As with all of these questions, I can only send them to the one source who knows the answers and that is Jesus Christ. But saying this doesn’t always communicate to an action or a direction.

THE CHURCH AND SINGLENESS
For the last two decades, I and many of my fellow ministers to singles have seen the decline of the church’s efforts to minister to single adults. While the singles population is now over 52 percent in the United States, with most being never-marrieds, churches are not making the effort to the reach us. The focus more than ever seems to be on the family.

But what churches don’t understand is the family starts with two single adults. If the church would spend time reaching singles, helping them in their identity in Christ, in their personal growth and developing healthy friendships, as well as by offering Bible studies and counseling for marriage, then the greater success of our future marriages and families will be.

We can’t keep hiding behind youth programs and a pro-family focus and hope healthy marriages will just happen. The church needs to help single adults meet each other in a healthy way, directing them toward godly friendships and teaching them the principles of courtship and marriage preparation. Otherwise, they will find other ways to find a spouse, often outside the church and, possibly, with someone who isn’t a believer.

Although not all single adults will get married, many due to their own fears and issues, I do believe in marriage and I believe God still brings people together. With that in mind, I have been praying for a solution to bring singles ministry back into the church.

Singles ministry in general takes a lot of work. You have to build a team of leaders, offer training, meet regularly, plan, pray, and do. Because of the work involved and due to so many pastors being fearful that members might “hook-up,” churches have stopped having a singles ministry.

Also, we are still seeing more women than men in church. As a result, most singles ministries are started by women. Unfortunately, groups led solely by women only grow other women. The team has to include men. Without this pairing of the sexes, your ministry will often fail. In addition, we are seeing a lot of singles ministries focused on social events rather than on teaching the Word of God.

Another problem comes when leaders who don’t find a team to share the responsibilities with gets burned out, resulting in a failed ministry.
​
So, what do we do? How do we bring a singles ministry back into the church and have it be successful? And how can we do it if we are limited in finding men to help? What about resources and support?

SOLUTION: Pray for a Mate™
While spending time in the United Kingdom doing ministry, I came upon a wonderful lady who shared with me something amazing. She had gone to her pastor and asked about doing a singles ministry at her church. Again, due to past experiences of what singles ministries could become, he said no. She then prayed and went back and asked if she could have a “prayer group for those who wanted to be married.” (Remember, 99.9 percent of all singles want to be married—maybe not this minute but eventually). She didn’t say anything about singles or ministry, but she did use two key words that most churches care about: marriage and prayer. They agreed and even offered her the space to meet.

She quickly gathered her team of friends—some married and some single—and they started meeting to pray, not sure what God would do. That small group turned into a larger one and before long they were meeting each month. From the start they only allowed women to come as they had enough men. They also created a structure that appealed mainly to serious prayer warriors.

The results were amazing. They saw lives changed, individuals found healing, some developed amazing friendships and others even got married. It’s now been over year and they are up to eighty men and eighty women. And it hit me—with a few slight changes, this could work in the U.S.

I realize not all singles would want to come to church to pray for a mate. Some might even get upset if this was the only activity their church offered singles. But if a church only has this, it’s still better than nothing. This program has the potential to lead to something. It’s certainly worth trying and making the investment. And the result? Healthier people who become healthier followers of Christ.

How to get started!​​
​1. Go to our contact page  and fill out the registration form.
3. Once we receive your registration, you will be given a password to access the other pages where you will learn how Pray for a Mate™ works including the structure and the prayer themes. 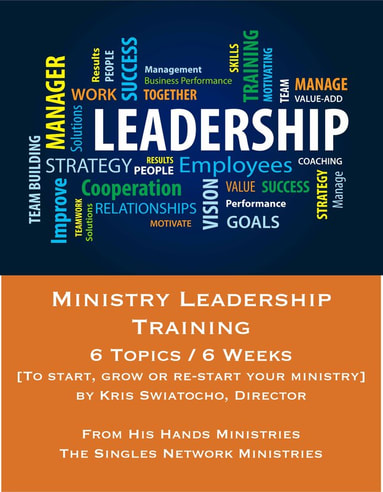 • Leaders that Last Curriculum is a:
Microsoft word document so you can alter to fit your specific group whether young adult, single adult or single parent, divorced or widowed.

WEEKLY TOPICS:
Week 1: Who You Are in Christ
Week 2: Affirming Your Calling as a Leader
Week 3: Spiritual Warfare
Week 4: Mentoring/Finding others with a Similar Calling
Week 5: Building the Team
Week 6: Caring for the Team.

Week 1: Who Am I?
Description: Everything starts and ends with a great team but a team starts with a great leader. A great leader should know who they are in Christ first in order to lead others. This leader also should have a personal, growing relationship with Christ. This lesson will focus on your identity, your personal growth in your faith, and your walk with the Lord.

Week 2: Who Ya Going to Call?
Description: Learning and affirming your calling to be a leader. Most maturing Christians are serving the Lord but often in the wrong area, this lesson will help you focus on the right area God is calling you into.

Week 3: The Devil Made Me Do It!
Description: This lesson focuses on how to recognize the enemy’s attacks on you, your team, and your ministry, and what to do when it does happen.

Week 4: Making Copies!
Description: This lesson focuses on the importance of recognizing potential leaders by starting with those who are voluntold versus volunteers.

Week 5: There’s No “I” in Team
Description: Everything falls and rises on leadership. Without a great team that is unified in the path to reach the goals God has put in place, leadership will fail. This lesson will focus on how to build a team that builds the ministry.

Week 6: Are You a Care Bear?
Description: This lesson focuses on how to keep our team, our leaders, and, ultimately, our ministry going and growing.

Kris Swiatocho and the Singles Network Ministry that you operate. Our singles group at my local church is flourishing and I give much credit to you.
​
Kris holds a singles retreat every September up in the mountains and I’ve attended the last 4 years. The 3rd year, Sept 2018 I came for the leadership portion of the meeting and was inspired by the teaching, many years of experience working with singles, messages shared, stories from other church leaders and resources galore at the meeting and on the website. I left that weekend fired up and it sparked me to start a singles focused bible study at our church which has been running a year now and doing great... I have so many stories I could share... many new visitors/members... connecting with singles in the church that weren’t plugged in.. networking with other Christian groups and churches... things just continue to spiral... we held a singles NYE celebration a few weeks ago. The owner of The Barn Dance (non-alcoholic club) that some of us go to often came. His club was only open on sat night BUT... he was inspired by the number we had at our dance and the amazing community... he had no idea that singles have that much of a need/want to be together. SO tonight he hosted his first Christian Singles Dance Party at The Barn Dance and it was a big hit. Planning to do a monthly dance there... opening with prayer and ending with praise songs and prayer. I can’t wait to see what God has for us in 2020. Also very excited about this years Singles Retreat! Find info on thesinglesnetwork.org and come join us Thanks Kris for all you do... for your heart for God and singles.
—Lisa Young, Lawndale Baptist Church, Greensboro, NC